International Forum "Brewing Industry of the Russian Federation-2030: a look into the future" 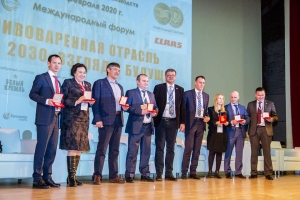 X International Forum "Brewing Industry of the Russian Federation-2030: a look into the future" took place in Moscow University of food production on February 6-7, 2020, as well as a tasting of samples of brewing products of "ROSGLAVPIVO" - the Main Beer in Russia.

This event is a joint project of the Union of producers of barley, malt, hops and beer-and-alcohol products, and the Union of independent brewers in Germany.

Participation in the Forum was an excellent opportunity to present the company to new potential customers from different regions of  Russia as a company that occupies a leading position in the field of sales-purchase of barley and malt production with its own malt factory in St. Petersburg.

On June 25, 2021, the V Central Russian Grain Forum and the X Field Day "Barley, Malt, Hops and Beer of Russia" were held in the Lipetsk Region on ...

On June 25, for the first time, Soufflet Agro Rus Field Day was held on our new experimental platform located on the territory of Plokhikh Farm, wh...

Learn more about our activities.
More